The San Jose SUV accident attorneys at Alexander Law Group, LLP, will passionately work with you to procure all possible monetary compensation you are entitled to after your injury. Our goal is to help our clients receive proper compensation for their pain and suffering as a result of SUV accidents. We realize that this is a difficult time for you and know it can be hard to associate a dollar amount to an injury. Fortunately, this is an area our attorneys specialize in.

Since its creation in the early 20th century, the sport utility vehicle (SUV) has gained immense popularity among American drivers. In the United States, in and around the 1990s, the number of SUVs on U.S. roads began to grow exponentially. According to the U.S. Bureau of Transit Statistics, in 2006, there were nearly 100 million SUVs and pickup trucks registered in the United States. However, along with their growing popularity also comes a growing threat: SUV rollovers and accidents.

The facts about SUV-related accidents can be alarming. The National Highway Traffic Safety Administration reported the following for California in 2009:

Get A Free Consultation On SUV Injuries

Our sincere thank you for your excellent service. We don’t know how our Chicago attorney found your firm, but it was a stroke of good luck for us. We are very grateful for your effort in achieving a successful and confidential conclusion for us in our San Francisco law suit.

Know The Dangers Of SUVs

Sport utility vehicles have several key differences compared with traditional automobiles that make them more susceptible to rollovers and crashes:

Since SUVs are generally taller than typical automobiles, they have a higher center of gravity. This leads them to be more prone to rollovers. The National Highway Traffic Safety Administration (NHTSA) reports that while most cars have about a 10% rollover chance, SUVs have anywhere between a 14% and 23% chance. Most SUV rollover accidents are caused by the vehicle “tripping,” or driving over or striking a low object (such as a curb), thus causing the rollover. SUV drivers who engage in emergency or quick maneuvers to avoid road hazards cause a significant number of SUV accidents as well. Having a higher center of graving simply makes the SUV handle less safely than a lower automobile.

SUVs are essentially a sedan or station wagon-type car built on a pickup truck frame. These types of vehicles can vary in weight from 2,000 to 8,000 pounds. This increased mass can accordingly do an increased amount of damage in an SUV accident. Since SUVs tend to be higher off the ground than regular automobiles, the front or rear bumper will often go over the top of a smaller car’s bumper in a crash. The combination of increased weight and height causes tremendous damage in accidents. Smaller cars involved in SUV accidents almost always incur more damage.

Take Action To Get Compensation

California SUV accidents are increasing in frequency and in damage. Due to their large size and higher center of gravity, they are involved in more accidents, injuries and deaths each year. If you or someone you know has been a victim of an SUV accident, contact one of our experienced San Jose attorneys today. Here at Alexander Law Group, LLP, our San Jose attorneys have decades of extensive experience handling the toughest SUV accident cases. Our firm has helped clients recover millions of dollars in damages for the pain and suffering they have incurred as a result of their SUV accidents. Below you’ll find a brief recount of a few of the cases we have won for our clients.

* Because all cases are different, these figures do not represent a guarantee of outcome.

When our firm accepts cases, we operate on a contingent fee basis. Simply stated, if we don’t win your case, you don’t pay anything. 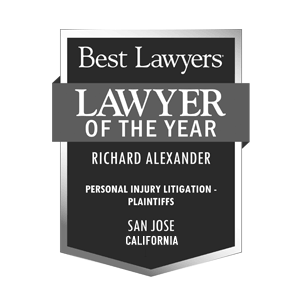